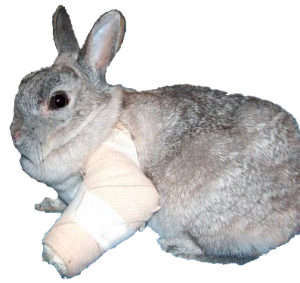 One day, as a young rabbit was going to visit my friends over the road, there was a van coming along the road. It was going too fast and it hit his back leg. They didn’t even stop to see if he was OK. So he had to get off the road with his bad leg. It was hard work moving himself to the other side of the road with a broken leg but he got there and he wanted to just rest until someone came along and saw him lying in the grass.

Then he heard a voice coming closer to him. It was a little girl. She picked him up and put him in a warm box and showed her dad. Her dad told her, ‘We must take him to the SPCA where they look after animals like him’. So they showed the lady at the SPCA place. She said, ‘He has broken his back leg badly but we can fix it for him and look after him’. The little girl – whose name was Jane – tried to tell her dad that she wanted to see him after school. Her dad said, ‘You have to ask the lady at the desk’. But the little girl found it hard to talk to people because of her disability.

Jane’s disability was that when she was born she couldn’t hear anything at all. So her dad and mother took her to the doctor. He said, ‘Your daughter is deaf in both ears and she might not talk at all’. Jane’s parents started to cry. They asked the doctor, ‘Is there anything we can do to help her?’ He said, ‘There’s one thing. You must be understanding about this and don’t judge her, okay, because she will need your support right now. The only way she can communicate with you right now is by reading your lips. So be careful what you say to her, okay.’ So they took their little girl home and let her play with her toys.

Because of Jane’s hearing disability, her dad asked the SPCA lady on her behalf if she could see the wounded rabbit after school. The lady said it was okay with her if Jane wanted to spend time with the rabbit.

So Jane came to see the rabbit almost every day after school. She would sit down next to his hut and talk to him and she would hold him in her arms and pat him. She would give him fresh food and water when she came to see him and clean out his little house. She named him Starbuck. Starbuck loved being held by Jane because he got to trust her more. They became best friends with each other. It was nice to see the rabbit being held and loved by someone who loved animals.

Jane started to open up more to the rabbit and the rabbit would listen to the little girl. His ears would go up when she talked to him about things. Jane’s dad visited her at the SPCA when he finished work. He watched his little girl play with the rabbit. Her face had a smile on it. Her dad had a tear in his eyes when he said to the lady, ‘I haven’t seen her smile for a long time’. The lady said to Jane’s dad, ‘Would you like to take the baby rabbit home for your little girl?’

Starbuck loved being with his new family because he knew that he would get looked after by his new friend. Jane would give him nice food to eat every morning and she would clean out his hut to make it nice for Starbuck to sleep in. She would hold him in her arms like a baby and pat him and kiss him. Her dad knew there was something very special between the rabbit and his daughter. Sometimes Jane would let Starbuck play outside, where he could eat carrots and grass. She would call him home when it got dark and he would always come back home to his hut.

The rabbit and the little girl made great friends with each other and the rabbit loved being held in Jane’s arms like she was his mother. Her dad watched them grow up and he knew that one day he would tell his little girl it was time to let Starbuck be free. He hoped his daughter would understand what he was saying to her.

As Jane was growing to be a young lady she started to think about things her daddy told her. ‘You know that Starbuck might be missing his family. Do you think that you should let him be free? I know that you have become closer to the rabbit and he has become a great friend to you. I know that you loved Starbuck and it was wonderful to see you smile once again. But you could still have good times with animals’, her dad said. ‘How about getting some work at a pet shop where they have baby animals because I know that you are good with pets. So how about after school we go and find out if there is any work at the pet shop for you?’ Jane said: ‘Thank you, Dad!’

So when Starbuck had been living with Jane for a bit, he got too big for his little house and he wanted to be free like all the other animals he saw. So Jane’s dad said to her, ‘I think it’s time to let him out and be free so he can find a lady friend to be with, Jane. I know it’s going to be hard on you but I think it’s the right thing to do for him.’ So they let him out of his hut to be free. Jane said to him, ‘Goodbye my little friend and good luck’. Starbuck turned around for the last time as if he was saying goodbye to Jane. Then Starbuck just walked over the hills to be free. On his way, he met a young girl rabbit. He looked at her and followed her everywhere!

One day, after Starbuck had been let free and Jane and her dad had talked to the pet shop about her working there, her dad signed to her, ‘Jane you’ve got a job working at the pet shop. You start tomorrow morning.’ Jane was over the moon. Her first real job! She couldn’t wait to start. She had breakfast and got ready to go. She walked in the door with a smile on her face. She looked at the animals; there were puppies and rabbits and birds. She knew that she was going to love working there every day.