We are members of the Palmerston North Network Group which we started in 2013. In the Network we talk about our interests together, share ideas, make friends, explore Palmerston North and support each other’s goals and dreams. The Network will help us to meet new people and try new things. We also like to do activities together like go out for coffee or go to a movie.

On the 30th of May we had a special afternoon tea. We decided to have this so we could celebrate the beginnings of the Network and meet new people. Each member invited two people they know from the community and we also had a lot of other guests from local organisations. In total we had around forty-five people turn up! Even the Mayor and the MP came, and we had representatives from The Volunteer Centre and the City Council among others. 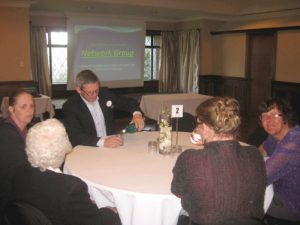 Finally the day came around and we all arrived at Hotel Coachman at 2:30pm. Tithi and her partner Wayne helped greet the guests and Craig handed out the name tags and showed people to their tables. Then we had a speech from Jo, and then Sophie our facilitator did a powerpoint presentation introducing the members and the Network to our guests. After this, Vinnie invited our guests to eat some lovely savouries, scones and sandwiches for afternoon tea. Then Pip asked everyone to return to their seats for a quiz. The quiz was good fun but maybe a bit too easy! After the quiz, David stood up and gave a great thank you speech to our guests. We also had speeches from Jessie, Pip and Vinnie.

We did a lot of planning before the event – Tithi and Pip helped decide when we would have the afternoon tea and Tithi visited Hotel Coachman to make sure the venue would be suitable. Then we had to design the invitations for our guests: Jessie and Tithi wrote the invitations, Craig and Robin chose the design and then Vinnie was our proof-reader. Pip and Callum helped choose the questions to use for our quiz. Callum was not able to be at the afternoon tea as he was out of town – but we look forward to sharing our next special occasion with him! 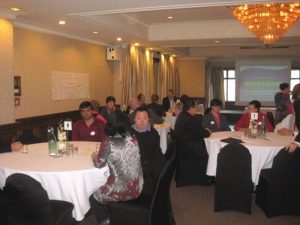 Looking back, it was a great day. We would all love to do it again. Craig says he would like to do it again as a dinner event, with each member inviting three guests. We could have a raffle as well.

Robin enjoyed getting all dressed up. Jessie says it was good listening to the conversations of all the different people. Tithi enjoyed helping with organising the event and David enjoyed giving his speech and enjoyed the food. Pip says the whole thing was awesome and the biggest highlight for her was meeting the local MP, Iain Lees-Galloway. She says it was great to see so many people turn up and she would like to thank Marianne, Eris and Tania, as well as her family. She says that Jo and Sophie gave great talks too. Vinnie says he would like to do it again and invite his girlfriend next time. He enjoyed talking to people and loved the company, and says it was lovely to see everyone come to support the Network. 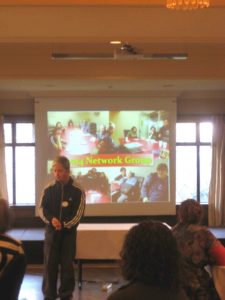