My Trip to Canada 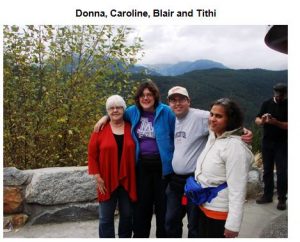 We left from Palmerston North Information Centre at 10 am and went to Wellington Airport and had lunch. We caught the 5.30pm plane to Auckland and then at 8pm another plane all the way to Vancouver, Canada!

The trip took over 12 hours. We had beef curry for dinner and scrambled eggs, beans & sausages. We slept a little bit and arrived in Vancouver at 2.15pm. We then caught a bus to our hotel, the Days Inn. We settled into our rooms. (We lost a day as we flew over the dateline.)

At breakfast we tried waffles for the first time. Then we walked to the railway station to suss out the train timetable and how to purchase and use the tickets. We caught the train into Canada Place. On the train we met Tammy, a Canadian lady who drives buses and is married to a New Zealander. She helped us find Canada Place where we booked for the flyover and went on the most amazing virtual trip. We stopped for a drink on the waterfront and then caught the bus which took us on a tour around the city. We hopped off at Granville, had lunch and shopped.

Afterwards we caught the bus across the bay then hopped on another bus. We ate dinner at the food-hall and then went home on the train to relax and chill out before another busy day tomorrow.

We caught the train and then and hopped on the double decker bus at Canada Place. We went sightseeing and stopped at the aquarium. At the aquarium we saw dolphins, jellyfish and amphibians. Wayne bought a paw necklace and we had lunch at the aquarium. We also went around Stanley Park and had dinner at the food-hall. Then we went back to the hotel – very tired!

In the morning a taxi picked us up at the hotel and we travelled to the harbour and waited for the rest of our group to arrive. We took photos of the Olympic torch while we waited. After this we then went to find the rest of the group. The boat was waiting for us and we boarded. The others were already there!
We had salmon and chicken, chocolate and coffee cake and apricot and cherry tart with almonds for lunch. Then we enjoyed the rest of the trip. There were great views of beautiful scenery. It was tiring but awesome!

We went back to the hotel and a group of us went to the Richmond night market. We had popcorn and Wayne bought me a ring.

A group of us travelled by train (got our trains mixed up – whoops!) to Landsdowne shopping mall to look at the shops.

A lovely bus driver drove us to Whistler. We stopped for coffee and did some shopping at Shannon Waterfall. At Whistler we had lunch and shopped and looked around the seaside village.

We split into two groups to go to Vancouver Island. One group went at 7.30am and the second group went at 9am. We had lunch on the ferry. We visited Butchart Gardens then went to downtown Victoria. We had our buffet dinner back on the ferry and were back at the hotel at 9.30pm.

Rest day: we went to Red Rock Casino for lunch and then rested some more.

One half of our group went to Capilano. We went to Richmond shopping centre to buy Donna a thank-you present. It has been a great trip and Donna worked hard to make it happen. She had a sore knee so we bought her a black cane with a silver tip and we supported her just like she does us. We made her do everything she possibly could with a sore knee. We had lunch at the shopping centre and then returned to the Days Inn.

We left the Days Inn and went to the airport to fly home. (This time we gained a day as we flew back over the dateline.)

Arrived home in New Zealand. We were all very tired but what a great time we had!!