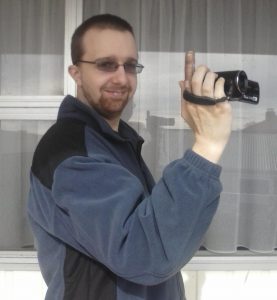 My name is Tim Wood, I am twenty-four years old and live in Palmerston North. I am addicted to film and I love making my own films. At the moment, I am working on two films – one is a documentary about the local network group and the other is for the New Zealand Film Festival. For my documentary, I plan to get footage of the new network facilitator when they are hired and interview some network members, as well as film them doing what they love. Next year I hope to be attending the Wellington Film School so I can train to become a film director and make my own blockbusters!

My favourite directors include Peter Jackson, Steven Spielberg and many others. I have a massive collection of more than three hundred DVDs and this is ever-expanding. I enjoy all sorts of different genres including fantasy, action, sci-fi and comedy, and have an interest in CGI (computer-generated imaging).

I recently purchased a small handheld camcorder and I have been filming around the city. I also enjoy watching music videos and movie trailers on youtube in my spare time and love playing computer games such as Dungeons and Dragons. I also have an extraordinary memory for reciting scripts and I have been in several productions in the past. Give me the name of a movie and I’ll be able to recite a particular scene (or several) right off the bat!

I studied at Ucol for three years and gained the necessary skills in graphic design, communication and photography to help me achieve my dream. I was also tutored by an expert photographer and I incorporate these skills into my films. I am currently beginning to save some money each week so I can get on a plane and fly to Wellington to visit the film school within the next few months, and hope to journey overseas in the future.