A Life of Cars and a Wonderful Hobby 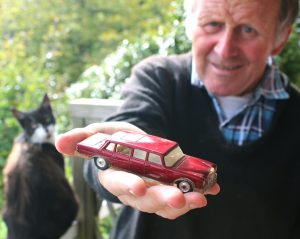 It was a Friday a night, it was raining and I would have been about 15 or 16 years old. While we were in Kilbirnie my father took me into a toy store and drew my attention to a toy car which was a replica of a Mercedes Benz 600 Pullman 1963 by Corgi toy cars.

The main feature of this toy car was that when the wheels moved the windscreen wipers moved too. I thought this was a clever feature. He brought this car for me and I’ve had it ever since, it sits proudly in my collection.

My father was a car enthusiast and when we would go down to the village, he would tell me the make and model of every car that was parked there. I thought this was fascinating and it triggered a long-term interest in me ever since.

My mother thought that collecting cars were the same as collecting dust! I have red Citroen Safari in my collection, my father owned the actual car, it was grey.